Short is the Road that Leads from Fear to Hate: Fear Speech in Indian WhatsApp Groups 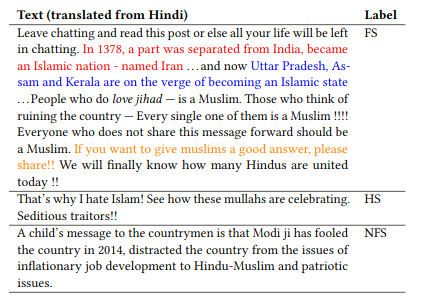 WhatsApp is the most popular messaging app in the world. Due to its popularity, WhatsApp has become a powerful and cheap tool for political campaigning being widely used during the 2019 Indian general election, where it was used to connect to the voters on a large scale. Along with the campaigning, there have been reports that WhatsApp has also become a breeding ground for harmful speech against various protected groups and religious minorities. Many such messages attempt to instil fear among the population about a specific (minority) community. According to research on inter-group conflict, such “fear speech” messages could have a lasting impact and might lead to real offline violence. In this paper, we perform the first large scale study on fear speech across thousands of public WhatsApp groups discussing politics in India. We curate a new dataset and try to characterize fear speech from this dataset. We observe that users writing fear speech messages use various events and symbols to create the illusion of fear among the reader about a target community. We build models to classify fear speech and observe that current state-of-the-art NLP models do not perform well at this task. Fear speech messages tend to spread faster and could potentially go undetected by classifiers built to detect traditional toxic speech due to their low toxic nature. Finally, using a novel methodology to target users with Facebook ads, we conduct a survey among the users of these WhatsApp groups to understand the types of users who consume and share fear speech. We believe that this work opens up new research questions that are very different from tackling hate speech which the research community has been traditionally involved in.